My cat has started to miss her litter tray… what can I do?

Unfortunately, inappropriate elimination (defaecating or urinating) is quite common in cats – in fact, it’s probably the most common behavioural “problem” seen in general practice. Getting to the bottom of it can be really frustrating, but there are some simple steps you can take to get started.

Is it urine or faeces she’s “missing” with?

If it’s both, it’s almost certainly either a problem with the litter tray, or a behavioural issue. There are a few medical issues that can cause this, but they tend to have fairly obvious other symptoms (e.g. spinal injury).

If it’s just faeces, this suggests a medical problem, stress, or a panic response. If this is the case, it is important to get them checked out by us – inappropriate defaecation is relatively unusual, and if it’s happening more than very occasionally, it needs investigation.

If it’s urine, it could be due any of a huge number of possible causes.

Is there somewhere in particular she’s eliminating?

It’s important to try and distinguish whether, in her mind, she’s avoiding using the litter tray, actively choosing to go somewhere else, or being indiscriminate in where she goes.

If she’s actively avoiding the litter tray, then she has a problem with the tray itself – and this is a really common issue. Firstly, it’s vital to make sure the litter tray is clean and doesn’t smell – cats are fastidious! – and the litter is regularly changed.

It is also important to make sure that you have enough trays – the correct number is the number of cats plus one. In other words, if you have two cats, you need three trays; if you are a “single cat household”, though, you still need two litter trays. If there aren’t enough, you run the risk of cats “missing” or avoiding the tray.

The next thing to make sure of is that the trays are positioned in the best places. Most cats require litter trays to be put in private (not by windows/doors), warm, quiet places – away from immediate view, noisy machinery (e.g. washing machines) and draughts. Cold cellars and damp porches or hallways, while ideal for us, are unpopular with cats!

Cats also like their trays at least 50cm (0.5m) away for their food and water dishes – and you can’t blame them, we wouldn’t want to eat dinner next to a toilet!

If that’s all correct, make sure the tray itself is set up as she likes it. Cats are very fussy in their requirements – some prefer certain types or depths of litter; some like a hooded or covered tray, while others are more comfortable in an open one. It’s often worth experimenting with different designs of tray, types and depths of litter. Most cats prefer a sandy-type litter, with a depth of 1-2 inches (2-5cm), but it does vary between cats; and they can, apparently out of the blue, decide they don’t like a litter they have used for many years.

The final point is to make sure the litter tray is accessible; as cats get older, they may suffer from arthritis causing stiffness in the joints. This makes it harder for them to hop in and out of a high-sided tray. If this may be the case, get her checked out us, and consider putting in ramps or steps to the tray (short lengths of wood are ideal!). Similarly, it's also important to rule out vision problems (a blind cat may struggle to find the litter tray), and senile dementia (when old cats seem to forget what the litter tray is for).

If she’s actively choosing to eliminate somewhere else, this suggests a behavioural issue, and is the most common reason for inappropriate elimination behaviour.

In most cases, this involves cats actively choosing to urinate against doors, windows, or other perceived entrances (e.g. televisions or, in extreme cases, mirrors and photo-frames).

The most common reason is stress. Cats can become stressed by obvious threats (new cats, large and aggressive cats or dogs); subtle ones (work being done in the house, changes in the people living there, e.g. a new baby or children leaving home, and stressed members of the household – often a problem in families that peaks around exam time!); and very obscure ones (changes in air freshener, moving furniture around, different curtains or carpets). The cat’s response to stress usually includes reinforcing their “core territory” (usually, the house itself) by marking their scent at all potential entrances and exits – by urinating and, occasionally, defecating there.

The best way to manage stress is to resolve the underlying cause; however, this may not be possible (it is not, for example, practical to bring children back from university because the cat wants them home…). In these cases, use of pheromone products (Feliway) and sometimes nutritional calmers (e.g. Zylkene) may help; it’s also useful to talk to us at Rushcliffe Vets, as we will be able to, if necessary, prescribe anxiolytic drugs (such as diazepam/Valium, used at a much lower dose than in humans) to help them adapt.

The other possibility is that she (wrongly) thinks the place where she’s going is in fact the right place – this is often a problem when people clean up a cat’s occasional “accident” with an ammonium-based bleach or cleaner. Unfortunately, these chemicals leave a characteristic odour that cats can smell (but we cannot) that they associate with latrine areas – i.e. those places which it is socially acceptable to use as a toilet. If this is the case, thorough cleaning with a deodorising cleaner specifically designed for cats will often help.

If she’s eliminating indiscriminately, this usually suggests a medical problem.

Whatever the cause, inappropriate urination is really frustrating, but can usually be resolved with patience and our assistance! 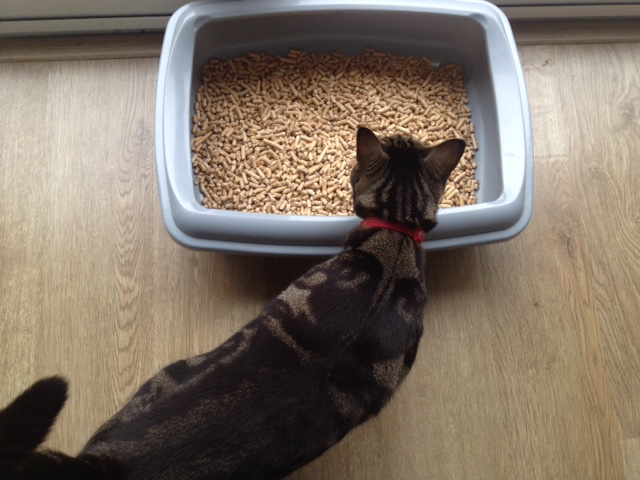