Practice Gadgets - What They Do: The X-ray Machine

Nowadays, virtually every veterinary practice will have an X-ray machine - or at least have access to a larger branch that has one. They are invaluable for looking inside our patients without having to open them up. However, this is a much misunderstood piece of equipment, and a lot of clients get very confused and worried about it! In this blog, we’re going to look at the machine, how it works, the safety implications of using it, and finally, what exactly we use it for.

Older machines had a rather formidable appearance, with lots of dials and warning lights. They also tended to have rather amusing names - one old model is called the “Mighty Atom” series! However, the modern ones are rather anonymous beige boxes, often with a separate control box somewhere else in the room.

However, the machine itself is only half the story - the images have to be developed somehow. Some more old-fashioned practices may still be using chemical developers, where the photographic film is exposed to the X-ray beam (in an opaque box called a cassette) and then dipped in various rather toxic chemicals to produce the image. However, we have an entirely digital system, where the image on the Imaging Plate is read by a laser and transmitted to a computer, displaying in seconds (and in perfect safety) what would have taken 10, 20 or even 30 minutes with most older film-based systems.

How does it work?

X-rays are actually one of the simplest imaging modes in principal. The machine releases a beam of radiation that passes through the patient, and different tissue types block different amounts of this radiation. Air lets pretty much all of it through, so appears black on the image; while bone and metal block almost all of it, appearing white. Soft tissues and fluids appear in a wide range of different shades of grey, depending on how many of the X-rays they allow through.

Generating the X-ray beam, though, is rather more complicated - essentially, a beam of electrons is projected at a very, very high speed (the same technology, albeit much more energetic, as in an old-fashioned CRT television). When this electron beam strikes a tungsten target, it releases a beam of X-rays, which is directed down towards the patient. The good news for us, though, is that we don’t need to worry about that - we enter the right settings into the machine, stand safely back and press the button and the machine does all the work!

What are the safety issues?

Well, X-rays are indeed a form of ionising radiation. That means that if an animal (or human) is exposed to a high enough dose, radiation sickness may occur. However, a veterinary X-ray machine isn’t capable of generating that strong a beam.

More of a concern is the cumulative effect of low doses of X-rays repeated over and over, possibly for many years. This can lead to cancer, even many years later. This is not, however, an issue for our patients - they almost certainly won’t be exposed to enough X-rays in their life for this to be significant. It’s more of an issue for our staff, which is one reason that, wherever possible, we like to perform X-rays on sedated patients while we stay outside the room. The risk to the patient from a one-off X-ray is negligible (yes, even in the later stages of pregnancy the risk is virtually zero), but the risk over a professional lifetime to our vets and nurses is significant if they don’t take suitable precautions. If a patient is too sick to be sedated and someone needs to stay in the room with them, the vet or nurse will wear lead gowns and gloves to minimise their exposure.

So what is it used for?

Anything that needs looking inside the body is potentially a candidate for X-rays! In particular, we use them for:

Sometimes, we even use other substances (“contrast media”, like barium or air) which are inserted or injected into the body to highlight something that isn’t normally visible on an X-ray. For example, a barium meal may allow us to identify a swollen gullet (megaoesophagus), and some wooden or plastic foreign bodies; while inflating the bladder with air can show us some bladder tumours or stones.

All in all, our X-ray machine is probably the most widely used imaging device in the practice, except for our eyes (and possibly our smartphones!). It allows us to see things and do things that would otherwise be impossible, and give our patients a standard of care that many humans would envy. 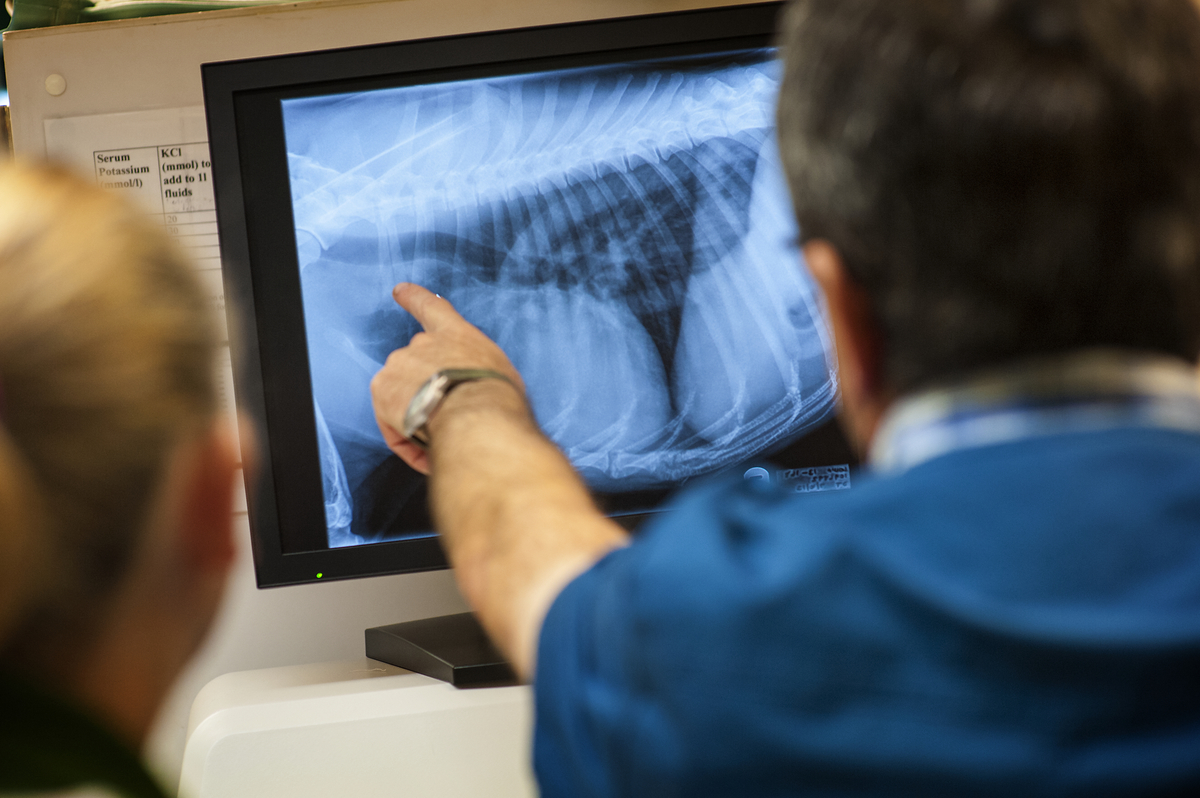