« Back to Latest News

Our keyhole spays remain very popular and our highly experienced surgeons have now completed over...

Bill trains vets on the Isle of Man to keyhole spay

Bill spent Monday and Tuesday on the Isle of Man training Ciara and Fern, vets from Strand Veteri...

We are now able to offer some of the latest orthopaedic procedures for lame dogs at a cost well b...

Update on charity work in Bosnia

Bosnia – Many of you will be aware that Bill went to Sarajevo in September with the Dogs Trust ...

We have lots of exciting staff news since our last news post.  ...

Waking to the joys of a Travel Lodge breakfast at 6am, and a gloomy bus ride through the delights of the Hownslow on the A4 wasn't the greatest start to the day but terminal 2 at Heathrow has restored my faith in air travel. What an amazing place- calm, airy and contemporary in design with some decent places to eat a drink; thank you Heston. Relaxed boarding to my Air Austria flight to the strains of the Blue Danube, all very refined after Scrum Air. 40 minute connection at Vienna airport didn't seem long enough for my bag to follow me to Sarajevo but it appeared first on the carousel. The plane weaves its way through the mountains on its approach to the airport- quite dramatic. So, why Sarajevo? I have volunteered to help on a project that the Dogs Trust are running in Bosnia. After the civil war in the early 1990's a very worthy law was introduced prohibiting the euthanasia of dogs as a method of population control, but no alternative strategy was taken so that there is now a massive stray dog problem in Bosnia. The Dogs Trust, with local agencies, have set up a project to improve animal welfare and implement a long term solution to the stray dog problem. Part of this is training local vets to neuter dogs as they are mainly farm vets and don't really have any small animal surgical experience. I have volunteered as a tutor on a week long training course at the university in Sarajevo giving hands-on tuition. Sounds exciting and a little scary at the same time. I will try to a make a daily blog to keep you updated on my progress! 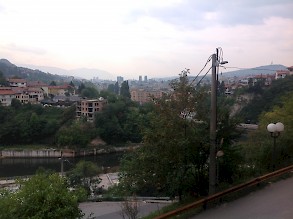 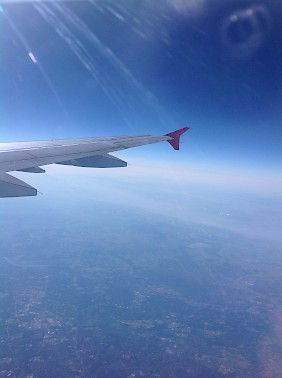 A 7.30am pick up from the hotel by Mucky, one of the local Dogs Trust staff in a Skoda Yeti of all cars so I felt totally at home. A manic drive through the morning rush hour to the veterinary faculty where we met the staff who run the teaching programme. The key ones speak excellent English which is very useful as Bosnian is not my strongest language. We were shown around their facilities a lot of which have been recently upgraded with assistance from the Dogs Trust and then the protocols we will be following were explained to us. These in some ways are different from the UK mainly because of the lack of facilities in the practices in Bosnia. There is a fixed protocol to encourage good practice in terms of patient preparation, Anaesthesia and sterile technique with lots of form filling to do. The rest of the morning was spent in the lecture room with the 6 students, following the lectures in English translation. After lunch the staff at the vet school performed a spay and castration which allowed us to see what techniques they use. Finally the students spent time practicing suturing and knot tying on foam models. A long and tiring day, and tomorrow promises to be even tougher as we are getting down to business proper. An early night is definitely called for. 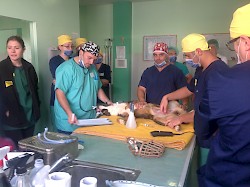 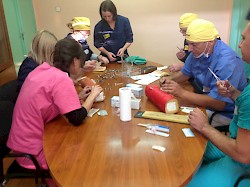 So it might not be Barrack Obama but please enjoy my selfie with my first Bosnian bitch spay. These dogs are stray dogs that local people feed in the streets or near their houses but don't own. As a result most of them are used to people and are fairly easy to handle. They are brought to the veterinary faculty the day before they are due to be neutered and given a basic check over to make sure they are suitable for neutering and don't have any major health issues. They are then starve and ready the following morning for a general anaesthetic and neutering. There are two vets assigned to Ellie, a vet nurse from the Dogs Trust, and myself- Elma a female vet who works in a small animal clinic in Sarajevo, and Nabooshim (I may have spelt that incorrectly!), a farm vet from the Serbian border. Each day they do the prep work and anaesthetic monitoring on a bitch spay and dog castrate and then perform one of each as well with my assistance.  This evening I went for a walk around the old part of Sarajevo which is very interesting. It has a very strong Ottoman influence and there is still a large Muslim population in Sarajevo. Lots of narrow cobbled streets with coffee houses and the smell of wood smoke. The attached picture is one of Sarajevo's unfortunate claims to fame as it is where Archduke Franz Ferdinand and his wife were assassinated by Gabriel Princep, precipitating the First World War. 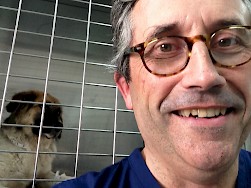 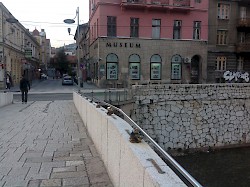 Another day another dawn as the sun rises over Sarajevo. The working day started out checking our patients from the day before who have all recovered ok and are fit to go back to where they were picked up. Dogs Trust staff will go back to check them in four days time. After yesterday I was a little worried how the students would get on today but its turned out to be a really productive day as both of them excelled themselves managing to perform a bitch spay each with minimal assistance from myself. It was most satisfying to see how they have improved so much in just 1 day. This evening Mucky, one of the Dogs Trust staff, took 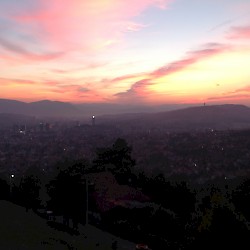 us for a sundowner- Sarajevo is in a beautiful location nestled in the mountains. He started talking about his youth as a 9 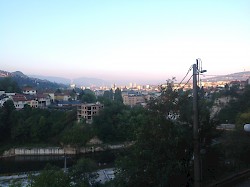 year old boy growing up as a Muslim in the Bosnian war. For many years he worked for the International Council for Missing Persons and was closely involved with the identification of bodies in the Screbrenica massacre. It was a most shocking conversation- we are so lucky to live with the freedom that we do.

My team and I have been working really hard the last few days. There is a veterinary nurse from Dogs Trust HQ called Ellie covering the nursing side of the training and we have 2 students assigned to us. Both are qualified vets. Elma has just finished her probationary year post

graduation and has an exam at Christmas after which she will be a fully fledged vet. She works in a small animal clinic in Sarajevo with 3 other vets all of whom have already completed the Dogs Trust training course and are active in their programme in Bosnia. The clinic doesn't currently have gaseous anaesthesia or an X-ray machine but they do have ultrasound and an in-house laboratory. Nabooshim ( I can't spell his name right because it contains a letter that isn't in our alphabet ) owns a practice in a town near the Serbian border and employs 4 other vets. He does mainly large animal work for small subsistence farmers who will have a small number of livestock. He also does horse work. He is doing the course because he wants to improve the quality of the work that his practice does. Unfortunately he only speaks Bosnian and Russian but his English skills are definitely improving alongside his surgical ones! There are photos of both Nabooshim and Elma attached- Nabooshim is wearing a catchy disguise! 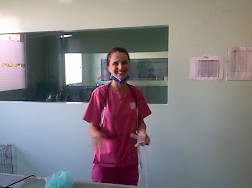 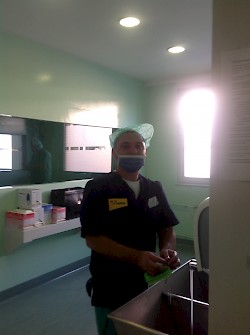 Tonight we've been out for a Dogs Trust Bosnia dinner to meet all the staff as well as the chairman of the trustees, Graham, Matt, the Dogs Trust property director and Adrian the CEO who are all visiting from London. We had a great evening of Bosnian food which has some Greek, some Ottoman and some Austrian influences in a stunning location overlooking the city. The Dogs Trust has an office in Sarajevo from which a public education programme was initially organised. This then developed into the vet training programme to train local vets in Sarajevo to neuter dogs in order to counter the stray dog problem. This programme is now in its fourth year with over 15,000 dogs neutered in the Sarajevo area. The plan is to gradually spread the programme over all the other cantons of Bosnia. The initial education programme is run through schools by a local third party organisation. If this is successful vets in the local area are recruited onto the training course at the vet faculty and the neutering programme initiated with support from the main office and practices in Sarajevo. The idea is that ultimately three will be vets all over the country competent in neutering dogs, ever improving veterinary skills and facilities, a controlled stray dog problem and improved animal welfare and public awareness. Hopefully it will then become a blueprint for other nations with similar problems seeking a solution. 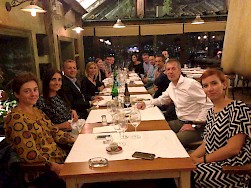 It's difficult to believe that my work as a tutor in Bosnia is done for now. It's been quite a week taking vets with limited small animal experience to a level that they can safely anaesthetise a dog, prepare it and its environment for aseptic surgery, and successfully neuter it. There is a vast amount of detail in there and the Dogs Trust, in combination with the veterinary faculty have come up with a strict protocol that offers safe anaesthesia and surgery with modern multimodal analgesia all in the context of limited resources. This is a country that has been ravaged by a divisive war and that is doing everything it can to get back on its feet to stride towards a better future. Everyone has a chilling tale of their experiences but prefers to put this behind them and look for a better future. Alan ( a not very Bosnian name!) told me that he joined the army at the beginning of the war at the age of 16 and ended up as a prisoner of war in Croatia where he was repeated beaten for his troubles leaving him with a back problem. Out of his 24 friends that joined up he and one other were left alive at the end of the war. He came back, completed his schooling, went through vet school and now is deputy head of the department of surgery. He has a great and ' a little bit crazy' sense of humour, and he and his department have been fantastic hosts with a particular mention to Amilla and Ismar who are both highly skilled and very helpful. The local Dogs Trust staff have also done everything they can to make us welcome. They've shown us around their beautiful city with its mix of cultures and stunning mountainside views, picked us up and dropped us off, taken us for numerous meals as well as supporting us at the vet faculty. Thanks in particular to Abel, Mucky, Nejra, Dino and Ensar as well as to all the other staff. Below is a photo of a few staff and students relaxing after a hard morning in the op theatre. 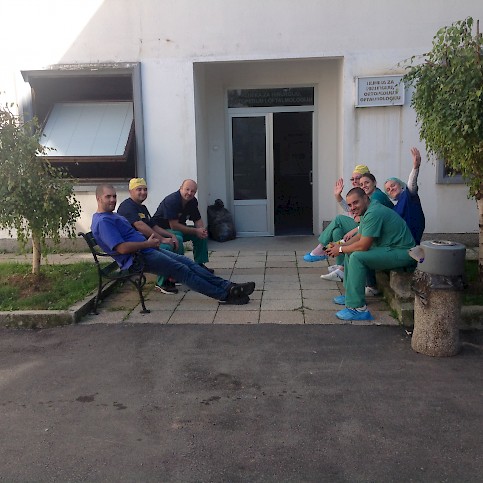